We are pleased to introduce you to the below artists who have been accepted into the Hilditch Guitar family. Feel free to explore their material via the links, and please show some support for their music.
NAME: Struan 'Chick' McFarlane
ACT: Bad Actress
www.badactress.net
www.facebook.com/badactressband
YouTube 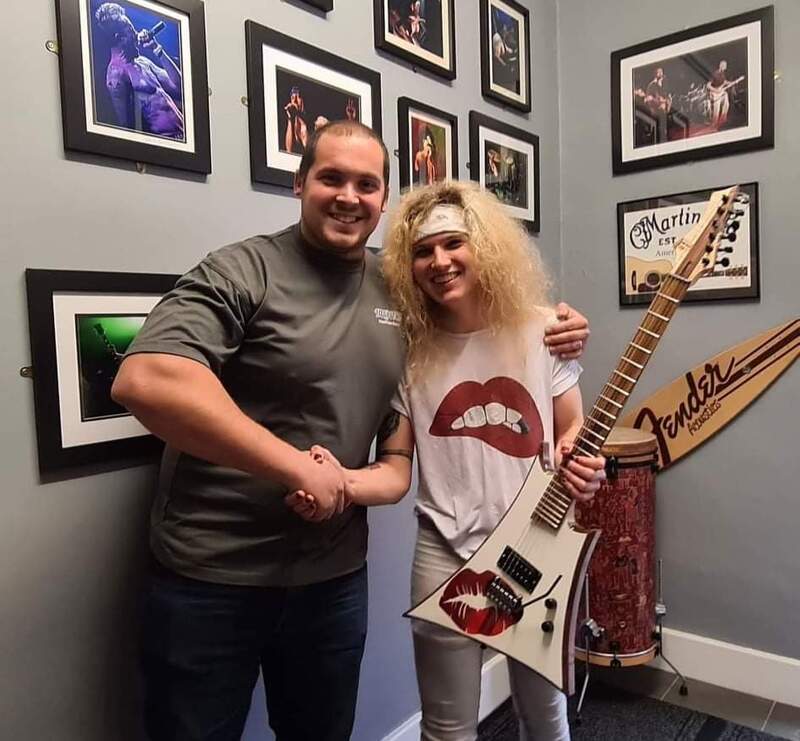 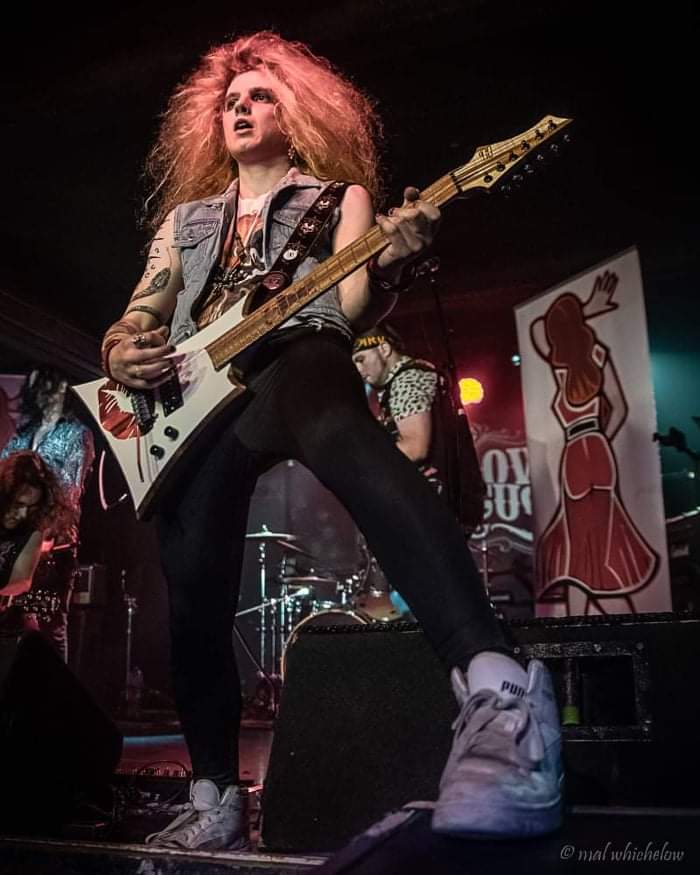 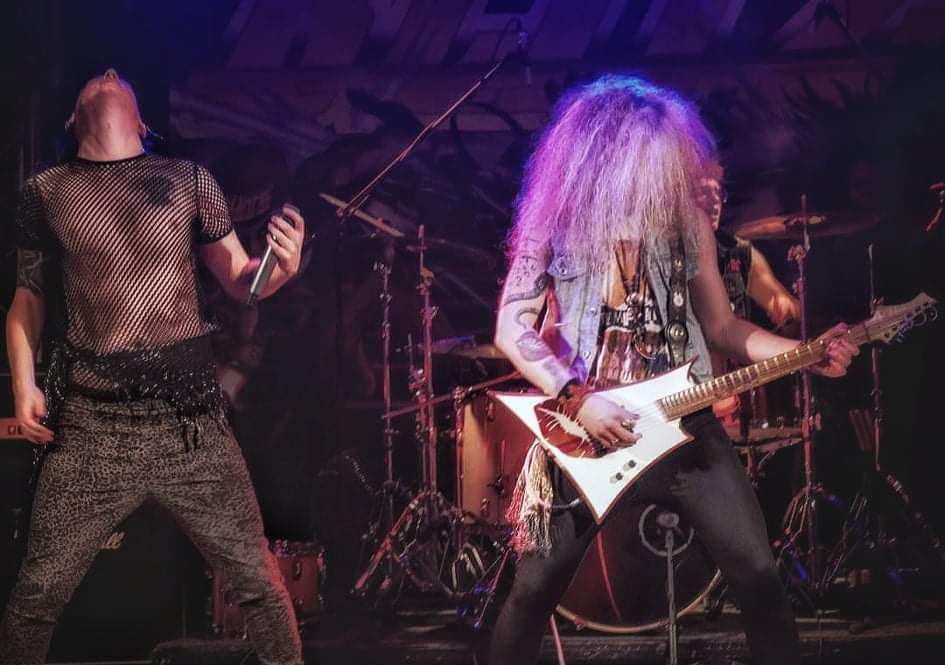 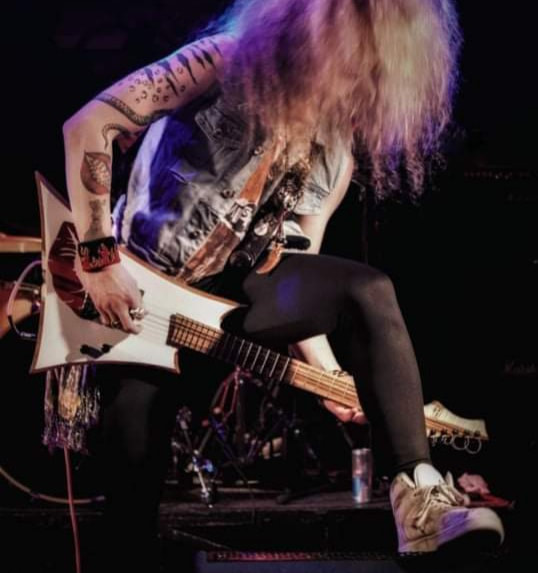 Chick is the lead guitarist of Scottish sleaze rockers Bad Actress, who attack every set with relentless energy and passion, and a clear inspiration from the golden age of 80's 'Hair Metal'.
The Guitar - A signature Raptor model, featuring the Bad Actress logo inlaid into the fretboard and Chicks signature 'lips print' on the body to contrast the white finish. A 5 piece multi laminate neck runs right through the full length, sandwiched between 2 Mahogany wings, seperated with slithers of Oak and Sycamore veneer. A single, hand wound, hot humbucker sits in the bridge position to provide the squealing harmonics that he implements perfectly in his solos. The strings are held in place by a Wilkinson WVS50Kii (a 2 point floating knife edge tremolo) and locking tuners.
Chick says:
​"Mark and I got chatting last year, he checked out the Bad Actress material and I'd been eyeing up some of his guitars - the one that stood out to me was the Raptor. I really liked the size of the body, and it just looked like it'd feel nice to play. I knew straight away that was the one to go for.
We chatted a lot about spec and hardware, and the paint job and inlay which are really special to me. Mark just absolutely nailed it.
​This thing is just addictive to play!"
NAME: Alex '80-R' Rennie
ACT: Bad Actress
www.badactress.net
www.facebook.com/badactressband
YouTube 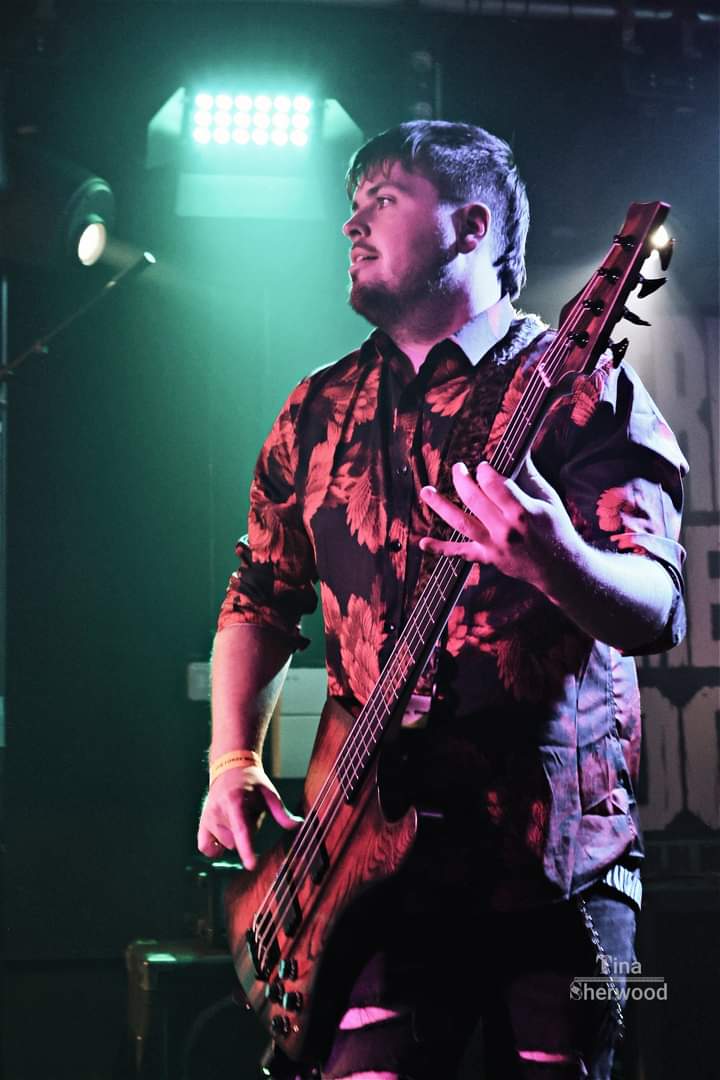 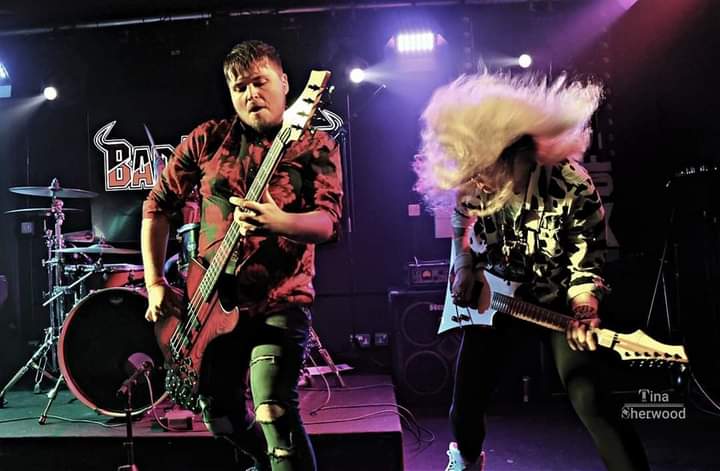 Alex is the bassist of the same band, Bad Actress, as Chick above. He loved Chicl's gutar so much he just couldn't help himself and soon followed suit in joining the team.
The Guitar - A modern take on a familiar classic, the '80-R' provides a classic look whilst boasting an unmissable attitude from the sharp lines and edges. With a similar, multi laminate through neck construction to Chick's guitar, it ties in the unison of the band on stage. Classic reliable hardware comes in the form of black Gotoh fixed bridge and machine heads, and these compliment the Fishman Fluence active pickups perfectly. Of course we had to get a personal inlay on there, which is Alex's moniker displayed in Padauk, contrasting with the Bog Oak fretboard, and with the dirty red finish choice you can't help but notice new details in the wood grain every time you pick it up.
Alex says:
"Obviously I first got to know Mark when he made the Raptor for Chick and, as an enthusiast myself, we had plenty to chat about and it didn't take long for us to start compiling ideas to modernise the classic T-bird bass and take it in the same direction as me as a musician, and the band. After seeing the love and passion Mark put in to Chick's guitar, I just knew he was the guy to make this dream bass happen for me!
​He has the perfect balance of exceptional build quality, customer service and expert advice to help decide on woods and the final paint job, Mark really has done an incredible job.
I look forward to working with him in the future!"
NAME: Wayne Dorman
ACT: Onslaught
www.powerfromhell.com
www.facebook.com/onslaughtuk
YouTube 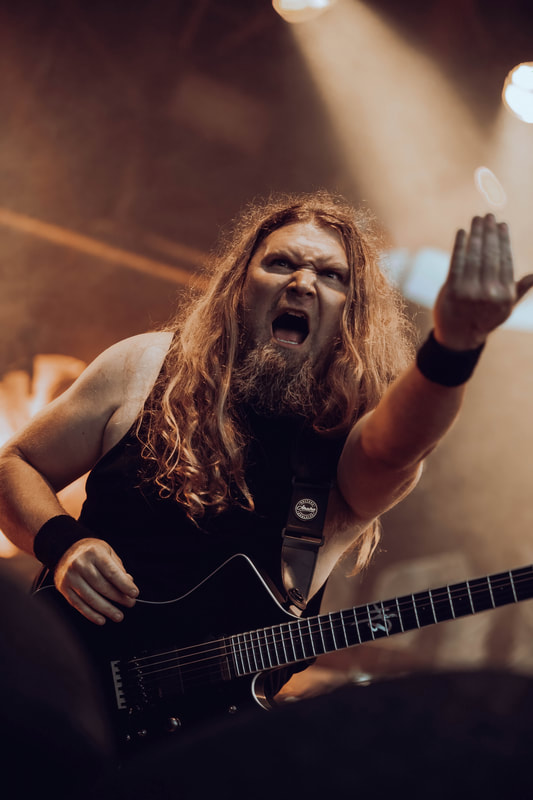 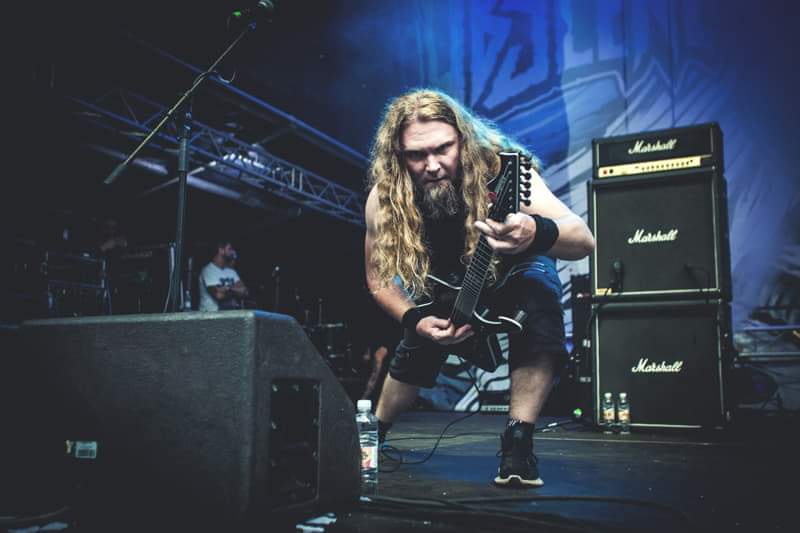 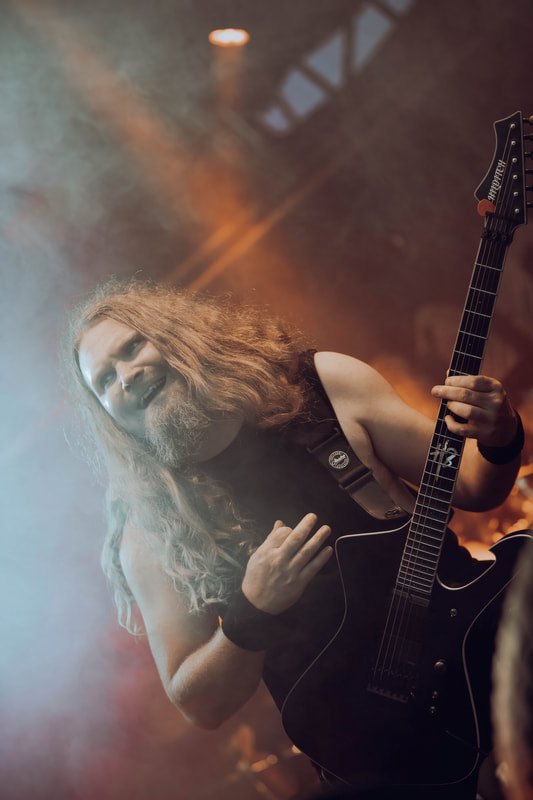 Onslaught
The guitar - A classic, recognisable staple in the heavy rock/metal genre which has been tweaked to improve some weak areas identified by Wayne. A 27" scale length drop tuning monster of shred, featuring an SD Blackout bridge pickup and a Sustainiac for infinite sustain, plus 27 frets for exciting creativity in solos. Add in the Official Floy Rose, in black naturally, and the Sperzel machine heads, and the amount and style of noises this thing can make is unrivaled. The inlay was designed by Wayne himself when he first decided on the idea of a custom build, and the whole guitar is designed and built around capturing and developing the band's image.
Wayne says:
"As the lead guitarist in one of the UK's most prominent thrash metal bands, I was looking for a high performance guitar that not only reflected the aggression of the band's sound, but also demonstrated my own taste in guitars. As a life long fan of the Ibanez Iceman, I came to notice, in my opinion, some design flaws such as upper fret access and neck dive, and I was keen to eliminate these in a custom guitar.
​I approached Mark and we decided on some subtle changes to improve these areas, whilst maintaining the classic looks, and the result is a true quality shred machine that I know will serve me well for many years to come.
What I really like about working with Mark, aside from the fact he is a top bloke, is that no matter how crazy the idea he WILL find a way to make it work!"